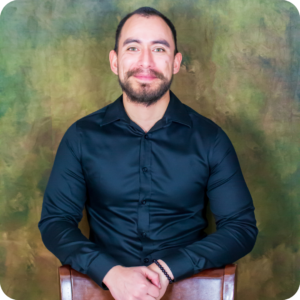 Rodolfo’s story begins in 1985 in San Salvador, El Salvador. He was born in the middle of a civil war from which the country has still not recovered to this day. His family moved to Canada in 1987 to make a better life and so that Rodolfo and his two sisters could have opportunities that do not exist in El Salvador.

As Rodolfo grew into a teenager he began to question to the status quo and why things were the way that they were. Rodolfo started questioning the educational system in grade 10 and stopped going to school in grade 11. He didn’t like being put into a “box” and told that he had to think, act, and be a certain way in order to be a functioning member of society.

After Rodolfo left school at 16 he did what any other young male would do that isn’t working or in school. He started to get into trouble. He constantly found himself in physical altercations and then soon after living a high risk lifestyle. This carried into his adult life and became a worry for him and those that cared about him.

One positive that came out of living this kind of lifestyle was that he had a tremendous amount of free time to do what he wanted to do. Rodolfo would read as much as he could and would stay up until 4 or 5 in the morning watching documentaries. His favorite topics were history, philosophy, conspiracies, biographies, business and even just brain teaser kind of books. He never stopped learning throughout these years and, in fact, he learned more than he ever did in school.

At the age of 24 Rodolfo decided to go back to school and got his Business Diploma with a Major in Management from NAIT. This was the beginning of him turning his life around for the better. After getting his diploma, and even while he was in school, he started getting involved in various business ventures. Always looking to learn something and maybe make some money at the same time.

He soon found the Network Marketing industry. He wasn’t too fond of the industry itself but he really loved the training that they did at their meetings. He learned more about business and how to run a business in 6 months of these trainings than he did in 2 years at business school.

From these trainings, he then found his way to taking some personal development classes. His life would never be the same. This was in 2013 when he was 27 years old. These classes opened his eyes to a totally different way of viewing the world and also himself. They taught him about how he has played a role in everything that has happened in his life and that he has the power to create any kind of life that he wants.

Ever since March of 2013 when he first walked through those doors he has not stopped investing in himself and his evolution. He now manages Integrity Seminars, the company that changed his life.

In April of 2017, Rodolfo published a book titled “Life Balance – Love Your Life by Finding Mental, Physical, Emotional and Spiritual Abundance,” This book came about as Rodolfo wanted to teach people about what it took for him to make sustainable changes in his life.

In September of 2017, Rodolfo became a Certified Life Coach. This was the next natural step for him on his journey of helping others. He is now able to help others 1 on 1 to uncover why they do not have the results they want and help them make the necessary changes to live healthier lives.

In October of 2019, Rodolfo started the Brothers From Other Mothers support group for Men by Men.

Rodolfo is also currently on the path to becoming a Shamanic Practicioner. He has been studying, and participating, in Shamanic teachings for awhile now and is in his 2nd year of studies.

Rodolfo is always learning, always looking for new ways to support his clients, community, and the world.